Safaricom recently released details on the structure of its entry into the heavily state-dominated Ethiopian telecoms market, outlining the vehicles it would use in this venture, the license it has been granted by the Ethiopian Communications Authority, and how it expects to operate in the most populous country in Eastern Africa. The Global Partnership for Ethiopia (GPE), a consortium that Safaricom is part of, won one of two New Telecommunications Licenses – a 15-year license that comes with the right to apply for a 15-year extension. The partnership consists of Safaricom (Kenya), Vodafone Group (UK), Vodacom Group (South Africa), CDC Group (UK), Sumitomo Corporation (Japan), and Development Finance Corporation (US-DFC). The bid for the license pitted the GPE against an MTN Group Limited-led consortium that had the Silk Road Fund and a Chinese Investment Fund as members

Following the award of the license, the consortium paid an $850M (Kshs 91.72B) fee to the Ethiopian Government through the National Bank of Ethiopia. To position itself for entry into the market dominated by the state-owned Ethio Telecom, Safaricom has subsequently formed a series of consortium companies. According to a recent public announcement, Safaricom has formed a special purpose vehicle Vodafamily Ethiopia Holding Company Limited (the SPV Company), a limited liability company incorporated in England. The SPV Vehicle is 90% owned by Safaricom, 10% by Vodacom International Limited, and 1 share by Vodafone International Operations Limited.

This SPV will own the majority shareholding (61.9%) of the Global Partnership for Ethiopia BV (GPE), a holding company incorporated in the Netherlands. In an interview with Julians Amboko, Safaricom CEO Peter Ndegwa noted that the move to incorporate GPE in the Netherlands is influenced by a Bilateral Investment Treaty between the Netherlands and Ethiopia – which provides the consortium with some advantages that may accrue resulting from tenets of the Treaty.

The creation of these entities is subject to approval by shareholders in an AGM slated for July 30, 2021. The final legal vehicle for entry into the Ethiopian market excludes the US Development Finance Corporation – an original member of the consortium during the bidding process.

In an official visit to Ethiopia, Kenya’s President Uhuru Kenyatta witnessed the formal issuance of a telecommunications license to Safaricom’s consortium. While the President was in the country for other bilateral issues, the issuance ceremony also reflected the interest of the Kenyan Government in the transaction given that it has a 35% shareholding in the telco. It further highlights how significant the entry into the Ethiopian market by Safaricom is. The high-level engagement around this process could also be a harbinger of Ethiopian authorities’ reception towards Safaricom’s entry into the market and a sign of Ethiopia’s commitment to the economic reform and liberalization process.

Today’s ceremony is the first step in an exciting and rewarding opportunity for Ethiopia. Kenya has seen the great gains and opportunities unleashed by Safaricom across the entirety of our socio-economic landscape. Ethiopia now stands at the cusp of making even greater strides in Safaricom’s areas of strength; which include digital presence, mobile money, telephony, data and fibre connectivity, and business solutions.

The Global Partnership for Ethiopia (GPE) has also recently appointed Anwar Soussa as the Managing Director of the Opco in Ethiopia, effective 1st July 2021. Anwar, who is currently the Managing Director of Vodacom DRC and the Chairperson of Vodacash (M-PESA), is tasked with the execution of the consortium’s goal to bring about transformational economic and social impact in Ethiopia and positively enhance the lives of its people. He will report to the Board of the Ethiopia entity and Safaricom PLC CEO.

This shows how significant voice and M-Pesa are as revenue drivers to Safaricom in the Kenyan market. The Ethiopian market presents different dynamics for Safaricom. Prices for voice are well below what Safaricom charges, which could have a bearing on revenues depending on Ethio Telecom’s delivery of services (Safaricom has had an exceptional run in this regard in its local market). Below is a table showing the comparison of prices charged by Ethio Telecom and Safaricom for voice and data for the Ethiopian and Kenyan markets respectively. 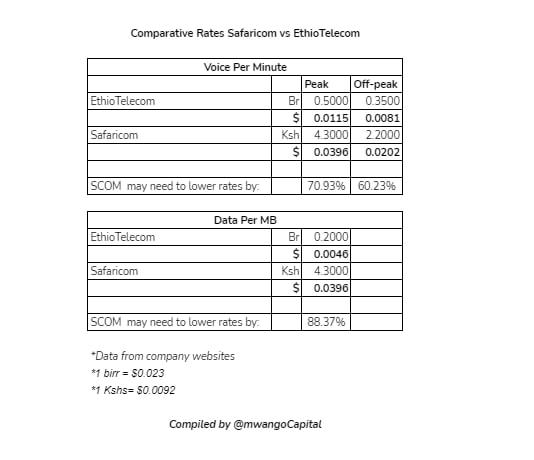 Ethio Telecom’s lower prices would effectively undercut Safaricom. However, as demonstrated in the Kenyan market, while pricing may seem to be an attractive selling point, service delivery is likely to be the determining factor for consumer choice and preference. Of concern is whether Safaricom will be able to access the robust state-controlled infrastructure considering that Ethiopia, as of now, does not permit the setting up of third-party tower operators.

Ethio Telecom’s flagship mobile money service, Telebirr, which was launched earlier in May has given consumers incentives in a bid to shore up its usage and increase adoption amongst Ethiopians. The promotion shown below illustrates how Telebirr has been incentivizing customers to adopt the mobile money service.

The service has outlined plans to recruit 21m users in 1 year and 33m users in 5 years. Projections indicate that 40-50% ($38.37B – $47.96B) of Ethiopia’s $95.91B GDP will be transacted on the platform, a significant change from the current status where over 70% of utility bills, wages, and Government-to-Person transfers are transacted in cash. After more than a decade of M-Pesa’s operation in Kenya, recent disclosures show that an equivalent of 214.28% of the GDP was transacted on the platform in the last financial year. This shows that mobile money can cause massive shifts in transaction modes.

Telebirr will have a head start in Ethiopia, but over the long haul, customer choice and preference might shift based on the innovations of the mobile money products, should Safaricom get a mobile money license to operate there. Notably, innovative products anchored on M-Pesa, e.g M-Shwari, Fuliza, and Bank-M-Pesa facilities have contributed to the entrenchment of M-Pesa as a product in Kenya through easy availability and network effects.

For Safaricom to replicate this in Ethiopia, it will require massive cooperation with State Agencies, something that Ethio Telecom looks likely to win over quickly based on its State backing.  Telebirr has already made strides in regards to bank integration and linkages, with the mobile money service announcing that users can transfer funds from their bank accounts to their Telebirr accounts in two banks – the Commercial Bank of Ethiopia and the Bank of Abyssinia. These banks have integrated their systems with Telebirr, with other banks expected to follow suit.

The Director-General for Ethiopia Communications Authority hinted at a 6 to 9-month pre-operational period, with the Kenyan Telco fully operating in Ethiopia in early 2022. Safaricom’s operations in Ethiopia will require significant capital investment in the early years for setting up operating infrastructure, with  Ethiopia’s Prime MinisterAbiy Ahmed Ali indicating a Foreign Direct Investment to the tune of $8B – the single largest FDI into Ethiopia to date.

In YoY terms, Safaricom’s FY21 CapEx declined 3.2% to Kshs 34.96B ($324m). Its FY22 guidance outlined CapEx spending in the region of Kshs 40 – 43B ($370.71m – $398.52m). With the move to Ethiopia, we expect that there will be a reversal in this trend with capital expenditure increasing in response to initial investment requirements in the Ethiopian market. Massive initial capital outlays also mean that there are no dividends to be expected soon from Ethiopian operations.

Because this is an investment which demands significant capital expenditure at the start, you don’t expect that dividends will be coming through in the early stages. We are quite comfortable that by the time we need to start transacting on dividend payouts to shareholders we expect the liberalization will be in play

The expansion into Ethiopia may, however, not have implications on dividend payouts for local operations.

Our dividend payout which is 80% of net income for the year remains unchanged. We have enough balance sheet flexibility to be able to support a dividend policy, which is what we have been paying so far. So, the dividend policy doesn’t change and that will remain in force going forward. 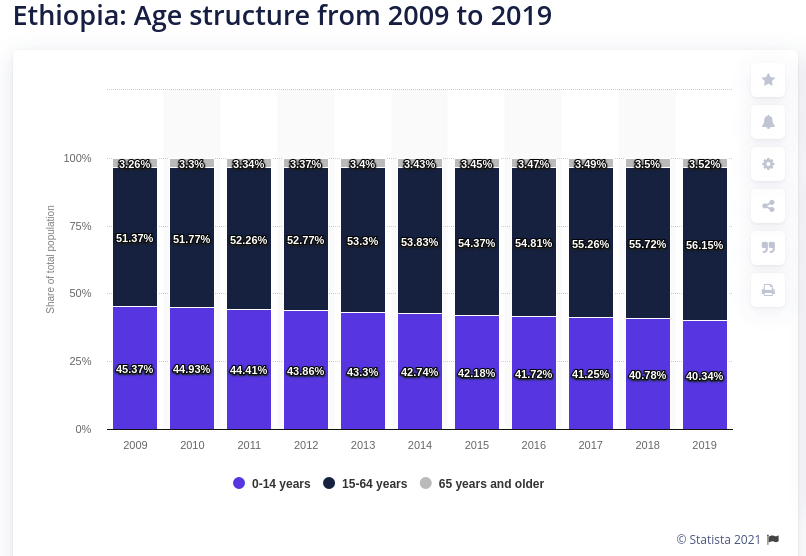 It is likely that the Ethiopian government will issue a second license, with speculation around the possibility of the license allowing the operation of mobile money. If this happens, South Africa’s MTN Group, whose consortium was outbid by Safaricom’s due to a lower $600m bid, has shown interest in bidding again if mobile financial services are included in the license.

For us, it will really be important to see mobile money in that opportunity to put forward a bid and if it’s not there then probably we wouldn’t even bid. We really wanted to have seen mobile money in the licence regime, so we adjusted our bid for the lack of mobile money.

While a third entrant into the market means increased FDI for Ethiopia and a better chance at challenging Ethio Telecom, it would also mean increased competition for Safaricom. In an effort to liberalize the economy, Ethio Telecom has also launched a tender process to sell a 40% stake to private investors. The stake sale will see the government retain 55% of the telco.

It is 40% to all interested bidders and 5% will be dedicated to Ethiopians. The 55% will remain with the government of Ethiopia.

Senior Advisor at the Ministry of Finance, Brook Taye

In sum, whichever way this entry goes, it will a defining moment for Safaricom.

View all posts by Mwango Capital